The death of Queen Elizabeth II, the UK’s longest-serving monarch, at the age of 96, has plunged all four nations into a 10-day period of mourning and the impact will inevitably be felt around the world Sport.

All professional sport in the UK was postponed on Friday, with the Premier League, EFL and Football Association in England and the Scottish FA deciding this morning that all games scheduled for this weekend would also be called off.

The Department for Digital, Culture, Media and Sport (DCMS) held an all-sports call at 9.30am and later released a statement saying the decision whether or not to play should be made by the individual governing bodies.

The Premier League then held its own meeting and decided that all matches would be canceled to honor “the Queen’s extraordinary life and contribution to the nation”.

No decision has yet been made on the matches scheduled for the upcoming midweek or next weekend.

How will the football schedule be affected?

Interruptions were inevitable after the death of a monarch who sat on the throne for more than 70 years. The EFL was the first to postpone fixtures in the hours after the Queen’s death at the royal family’s Balmoral estate in Scotland. Burnley were due to host Norwich City in the Championship, with Stockport County traveling to Tranmere Rovers in League Two, but Friday’s two games were called off.

The Premier League, EFL and FA were part of discussions between the sport’s governing bodies and DCMS early on Friday morning and at 11.30am it was confirmed that all matches over the weekend would be postponed.

“We and our clubs would like to pay tribute to Her Majesty’s long and unwavering service to our country,” Premier League chief executive Richard Masters said.

“As our longest serving monarch, she was an inspiration and leaves behind an incredible legacy after a lifetime of dedication. This is an extremely sad time not only for the nation but also for the millions of people around the world who admired him, and we join with all those who mourn his passing.

The EFL followed suit by canceling Second, Third and Fourth Division games throughout the weekend, as did the Football Association. This means the opening weekend of a new Women’s Super League is postponed, along with all National League, FA Trophy and local games. All football in Scotland scheduled for the next few days has also been suspended.

Announcements about the fixtures scheduled for next week weren’t initially forthcoming as the UK enters a period of national mourning which will end with the Queen’s funeral at an as yet undetermined date, but it is expected that the season EFL resumes with a full schedule of matches. all Tuesday and Wednesday. Discussions on which matches will be played in the three European competitions on Tuesday, Wednesday and Thursday continue.

The National League said in a statement: “At this time, National League fixtures will take place as scheduled from Monday, September 12, although we understand that no sporting events of any kind will be permitted on day of the Queen’s funeral.

“The decision to postpone this weekend’s fixtures is being taken in accordance with FA guidelines in consultation with the Department for Culture, Media and Sport. The League fully supports this position.

European matches at Manchester United and West Ham United last night were allowed to go ahead as planned, as the turnstiles had already opened when the Queen’s death was announced at 6.30pm. Arsenal’s European game in Switzerland was already underway.

UEFA issued a statement on Thursday evening offering their “sincere condolences to the Royal Family and citizens of the UK and Commonwealth realms”, but have yet to comment further on the participation of the 10 British teams. qualified for the group stages of the Champions League. , Europa League and Europa Conference League will be affected on matchday two next week.

The Premier League are set to play their final round of games before the final international break before the World Cup next weekend, which is a potential date for the Queen’s funeral.

The Cabinet Office statement added: ‘As a sign of respect, organizations may consider canceling or postponing events or closing venues on the day of the state funeral. They are under no obligation to do so and it is entirely at the discretion of the individual organizations.

For all the UK government will allow each sport to make its own decisions for the scheduling of matches over the next few days, there are the practicalities of the police apparatus to consider when weighing whether matches can go ahead.

Large numbers are expected to descend on London to pay their respects to the Queen once her body is transported there from Scotland, leaving resources stretched across the country. This security operation will require a high level of policing, with numbers expected to be drawn from across the UK.

Replaying matches behind closed doors is seen as an unlikely option.

Other sports, including cricket, golf and horse racing, had already opted to postpone events scheduled for Friday.

The approach to football contrasts with other British sports. The Rugby Football Union (RFU) and Rugby Football League (RFL) have confirmed that matches scheduled for Saturday and Sunday will go ahead as scheduled, while the horse racing schedule will also resume with the St Leger race at Doncaster in a rearranged meet on Sunday.

A statement from the RFL said: “This has been a difficult decision – we have taken into account the desire expressed by players and clubs at community level to come together to share their grief and celebrate the life of Her Majesty Queen Elizabeth II , a former patron of the Rugby Football League.

What are the precedents?

Such was the Queen’s long reign, there is no modern precedent for how British sport responds to the death of a monarch.

The death of George VI in 1952, which meant that Elizabeth II ascended the throne at the age of 25, did not interrupt the football calendar. Four FA Cup matches were played on the evening of the King’s death, while a full fixture series followed three days later on Saturday.

No matches were played on the day of his funeral – a Friday – but sport continued uninterrupted the following day.

The death of Diana, Princess of Wales caused greater disruption in 1997, even though she was not head of state.

Killed in a car crash in Paris in the early hours of August 31, a Sunday, it was decided that a Premier League game between Liverpool and Newcastle United scheduled for later that day would not take place. An Old Firm derby between Rangers and Celtic, due to be played on Monday night, has also been canceled but Bolton Wanderers have faced Everton in the Premier League. 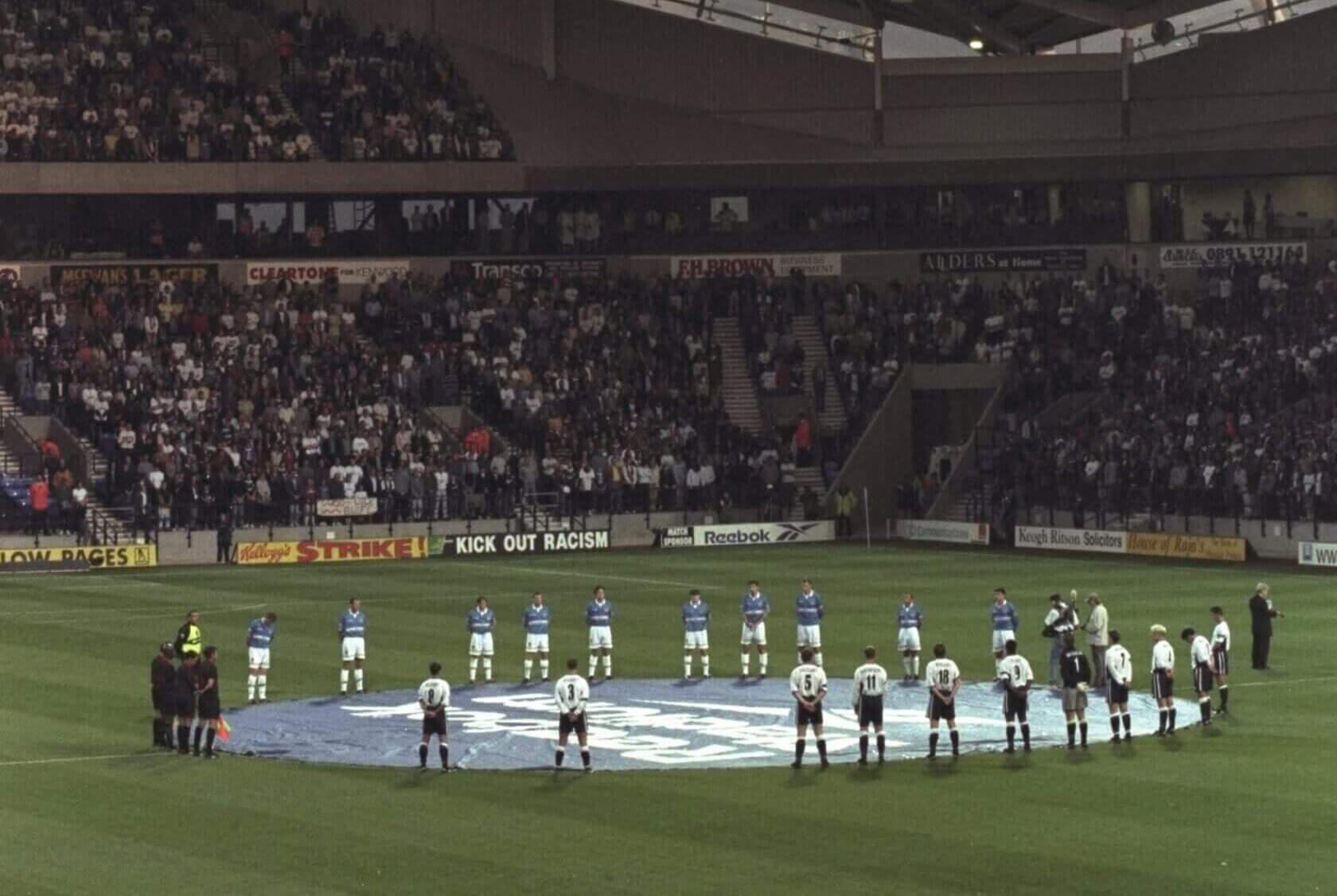 A minute’s silence is observed for Diana, Princess of Wales as Bolton Wanderers host Everton in 1997 (Picture: Stu Forster/Allsport)

No football in England or Scotland was played on the day of Diana’s funeral – September 6, a Saturday – as a mark of respect. Given that it was during an international break, this meant that Scotland’s World Cup qualifier at home to Belarus had to be pushed back 24 hours after initially opting to continue on the original date. .

England, then managed by Glenn Hoddle, only played against Moldova four days after the funeral. The England players wore black ribbons and observed a minute’s silence.

The UK has not attended a state funeral since the death of former Prime Minister Winston Churchill in 1965. A full schedule of FA Cup fourth round matches took place on the same day.

When could these games be revamped?

It’s already a unique season for domestic football, as a winter World Cup in Qatar brings the Premier League to a six-week shutdown from mid-November. Clubs competing in Europe don’t have a pristine midweek until the start of the year and find space for one or possibly two rearranged Premier League games, if the weekend action next is also postponed, will not be easy in this season of all seasons.

There is room from January, but teams progressing in cup competitions, both at home and abroad, will find their schedules still crowded with any further postponement. All Premier League clubs were already set to play 22 games in this competition between December 26 and the final round of fixtures on May 28, with up to nine more to come for any side qualifying for a European final .

If matches were to be postponed in any of Europe’s competitions, with 10 British clubs (seven from England, three from Scotland) involved in all three group stages, it would cause significant complications.

All six rounds of group matches across the three tournaments were played out over the next two months to be completed before the World Cup break, allowing the knockout stages to begin, as is tradition, in mid- february.

It would be unclear when those matches might be rearranged or whether European football’s governing body UEFA would agree to postponements.