Ahead of the 2022 FIFA World Cup, which kicks off on November 20, this series will take you through 25 controversies from the previous 21 editions.


Xherdan Shaqiri and Granit Xhaka struck in the second half to lead Switzerland to a 2-1 win in Russia on Friday, but it was their celebration that captured the most attention.

Shaqiri and Xhaka joined hands to form what looked like a double-headed eagle, similar to the one on Albania’s flag, threatening to stir up political tensions in the Balkans.

Shaqiri and Xhaka are of Kosovo descent, the former being born in the partially recognized nation which was fought against by forces of the Federal Republic of Yugoslavia – Montenegro and Serbia at the time – and the Kosovo Liberation Army in the late 1990s.

Although recognized by UEFA, Serbia refuses to see Kosovo as an independent state. 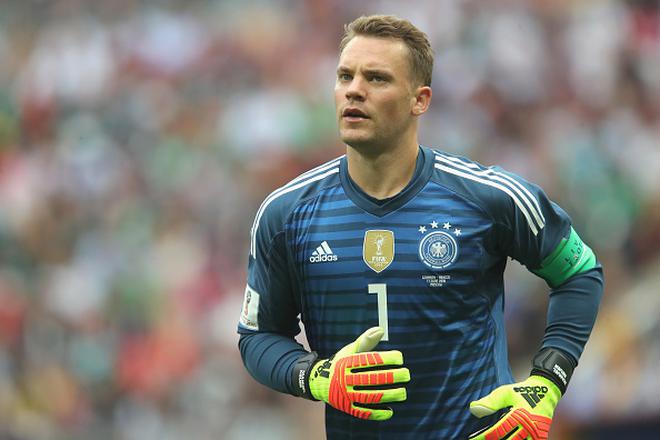 Germany goalkeeper Manuel Neuer has been subjected to homophobic insults from Mexican fans during the Group F match of the 2018 FIFA World Cup on June 17, 2018 in Moscow, Russia. | Photo credit: GETTY IMAGES

Germany’s defense of their World Cup title began with a whimper as they suffered a surprise 1-0 loss to Mexico in Moscow.

A dynamic Mexico barely gave their most illustrious opponent a chance to settle in a thrilling opener. The positive approach was rewarded with the game’s only goal after 35 minutes when Hirving Lozano completed a smooth counter-attacking move with precise drive.

However, FIFA later opened disciplinary proceedings against the Mexican Football Federation (FMF) over alleged homophobic chanting during a game against Germany.

It has been alleged that some Mexican fans chanted insults at German goalkeeper Manuel Neuer as he prepared to take a goal kick in the first half. Finalist in 2006, France did not even approach the same stage four years later in South Africa.

After a dismal failure in the final of the 2008 European Championship, it was a surprise that the hierarchy of French football kept Raymond Domenech as coach. There were terrible ructions among his team. The horrible climax, one might think, came at half-time in the French locker room, when France were battling Mexico. Domenech suggested Anelka play wide rather than in the middle, which was met with an outburst of obscene language.

As it happened, although Domenech was willing to give Anelka a second chance – a chance that would hardly be taken – the hierarchy brought Anelka home.

Franck Ribery, not the same player who made such an impact at the 2006 tournament in Germany, was an abrasive and disruptive figure who for some reason sank his knife into young Bordeaux midfielder Yoann Gourcuff. Thierry Henry, author of the incredible double handball that gave France a vital goal in Paris against Ireland and almost ensured the passage of the nation in South Africa, thought he was sure of a starting place in the team but didn’t get it.

The French government down to President Sarkozy made a point of intervening in the chaos, Sarkozy actually receiving Henry on an official visit. Not a moment too soon, the president of the French Federation, largely responsible for the Domenech fiasco, has resigned. Argentina’s Carlos Tevez (11) scores a header past Mexico’s Efrain Juarez (R) during the round of 16 of the 2010 World Cup at Soccer City stadium in Johannesburg June 27, 2010. ‘I know I was offside, I know it was selfish but as long as they say it was a goal, that’s fine with me and the team,” Tevez said after the game. | Photo credit: REUTERS

Argentina, managed by Diego Maradona, beat Mexico 3-1 in Cape Town to set up a heavyweight quarter-final with Germany in 2010. While the South American dominated the match, Carlos Tevez had the looks oddly offside before scoring a Lionel Messi’s opener. center in the 25th minute.

Video replays of the goal were played around the stadium which showed there were no players between Tevez and the goal when he received the pass.

The decision prompted the Mexican team to circle the linesman following the awarding of the goal and led to a scrum as the referee attempted to leave the field at halftime.

“At first, I thought he [the referee Roberto Rosetti] I said it wasn’t a goal and then I saw the signal and started (celebrating) and I was happy,” Tevez said after the win. “I know I was offside, I know it was selfish but as long as they say it was a goal it’s fine for me and the team.”

One of many incidents in the quarter-final match between Hungary and Brazil in 1954. The game, which was won by Hungary 4-2. was marked by fighting and scenes of anger in Bern, Switzerland on June 27, 1954. | Photo credit: THE HINDUS ARCHIVES

The 1954 World Cup quarter-final between Mexico and Brazil would surely have ended in utter chaos had it not been for the courageous refereeing of England’s Arthur Ellis. The Hungarians who won 4-2 were not the culprits. Indeed, when Hidegkuti scored in just the third minute, sneaking in to hit a left wing corner into the roof of the net, he had his shorts ripped off. Barely five minutes later, imperturbable, it was on his immaculate cross that Kocsis gave the lead: 2-0.

In the mud, in the rain, the game was getting tougher and tougher. When Hungarian right-back Buzansky brought down Indio, big right-back Djalma Santos – who will later be seen chasing Czibor, spitting and threatening – scored from the spot. But Hungary themselves converted a penalty when, in the 60th minute, Brazil’s centre-half Pinhiero netted a cross from Kocsis, Lantos’ left-back making it 3-1.

However, the game was open and a glorious goal from the powerful Brazilian right winger Julinho, an electric solo, a devastating shot, made it 3-2. Now Brazilian left-back Nilton Santos and Bozsik have come to blows; both were expelled by Arthur Ellis.

Chaos threatened. The police were on the ground. Fists flew. With four minutes to go, Ellis sent off Brazilian left inside Humberto Tozzi, who dropped dramatically but unsuccessfully to his knees to beg for mercy. One more minute, and Czibor, inside Puskas’ left, crosses for Kocsis’ merciless header to make it 4-2.